Spelling : The Jay and the Peacock

The Jay and the Peacock
A Jay venturing into a yard where Peacocks used to
walk, found there a number of feathers which had fallen
from the Peacocks when they were moulting. He tied
them all to his tail and strutted down towards the
Peacocks. When he came near them they soon discovered
the cheat, and striding up to him pecked at him and
plucked away his borrowed plumes. So the Jay could do
no better than go back to the other Jays, who had watched
his behaviour from a distance; but they were equally
annoyed with him, and told him:
‘It is not only fine feathers that make fine birds.’ 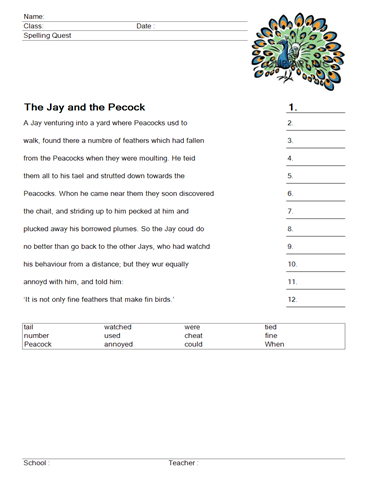