Androcles
A slave named Androcles once escaped from his master
and fled to the forest. As he was wandering about there he
came upon a Lion lying down moaning and groaning. At
first he turned to flee, but finding that the Lion did not
pursue him, he turned back and went up to him. As he
came near, the Lion put out his paw, which was all
swollen and bleeding, and Androcles found that a huge
thorn had got into it, and was causing all the pain. He
pulled out the thorn and bound up the paw of the Lion,
who was soon able to rise and lick the hand of Androcles
like a dog. Then the Lion took Androcles to his cave, and
every day used to bring him meat from which to live. But
shortly afterwards both Androcles and the Lion were
captured, and the slave was sentenced to be thrown to the
Lion, after the latter had been kept without food for
several days. The Emperor and all his Court came to see
the spectacle, and Androcles was led out into the middle
of the arena. Soon the Lion was let loose from his den,
and rushed bounding and roaring towards his victim. But
as soon as he came near to Androcles he recognised his
friend, and fawned upon him, and licked his hands like a                                         friendly dog. The Emperor, surprised at this, summoned
Androcles to him, who told him the whole story.
Whereupon the slave was pardoned and freed, and the
Lion let loose to his native forest.
Gratitude is the sign of noble souls. 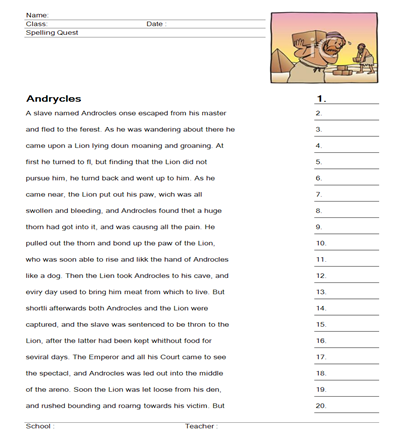 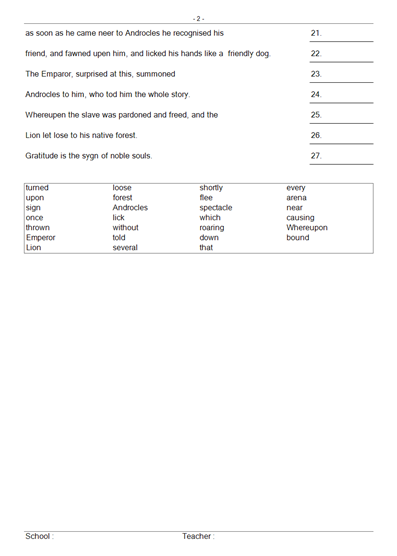