Spelling : The Woodman and the Serpent

The Woodman and the Serpent
One wintry day a Woodman was tramping home from
his work when he saw something black lying on the snow.
When he came closer he saw it was a Serpent to all
appearance dead. But he took it up and put it in his bosom
to warm while he hurried home. As soon as he got
indoors he put the Serpent down on the hearth before the
fire. The children watched it and saw it slowly come to
life again. Then one of them stooped down to stroke it,
but thc Serpent raised its head and put out its fangs and
was about to sting the child to death. So the Woodman
seized his axe, and with one stroke cut the Serpent in two.
‘Ah,’ said he,
‘No gratitude from the wicked.’ 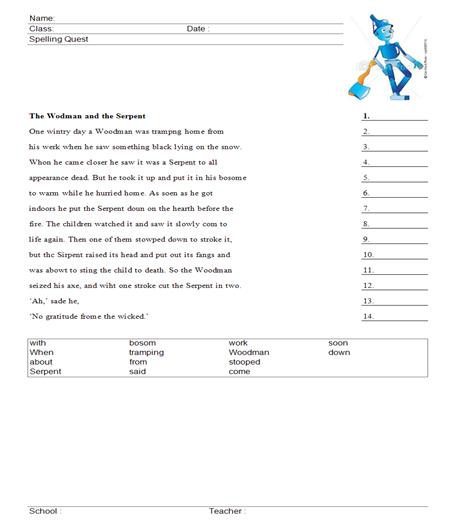