Spelling : The Frog and the Ox

The Frog and the Ox
‘Oh Father,’ said a little Frog to the big one sitting by
the side of a pool, ‘I have seen such a terrible monster! It
was as big as a mountain, with horns on its head, and a
long tail, and it had hoofs divided in two.’
‘Tush, child, tush,’ said the old Frog, ‘that was only
Farmer White’s Ox. It isn’t so big either; he may be a little
bit taller than I, but I could easily make myself quite as
broad; just you see.’ So he blew himself out, and blew
himself out, and blew himself out. ‘Was he as big as that?’
asked he.
‘Oh, much bigger than that,’ said the young Frog.
Again the old one blew himself out, and asked the
young one if the Ox was as big as that.
‘Bigger, father, bigger,’ was the reply.
So the Frog took a deep breath, and blew and blew and
blew, and swelled and swelled and swelled. And then he
said: ‘I’m sure the Ox is not as big asBut at this moment
he burst.
Self-conceit may lead to self-destruction. 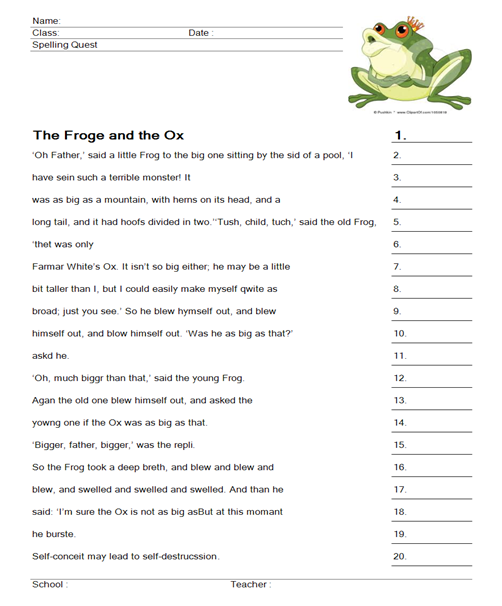 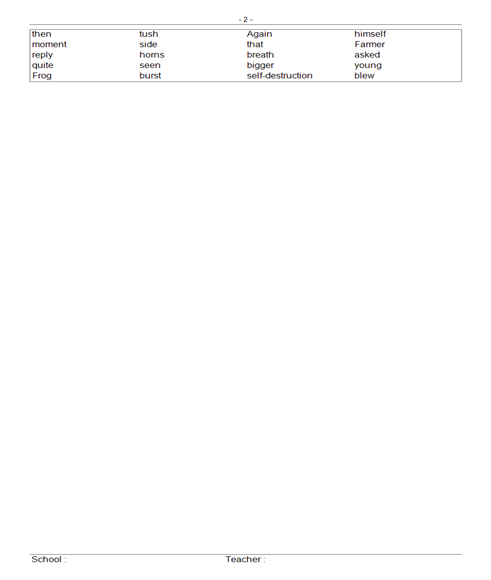