Spelling : The Frogs Desiring a King 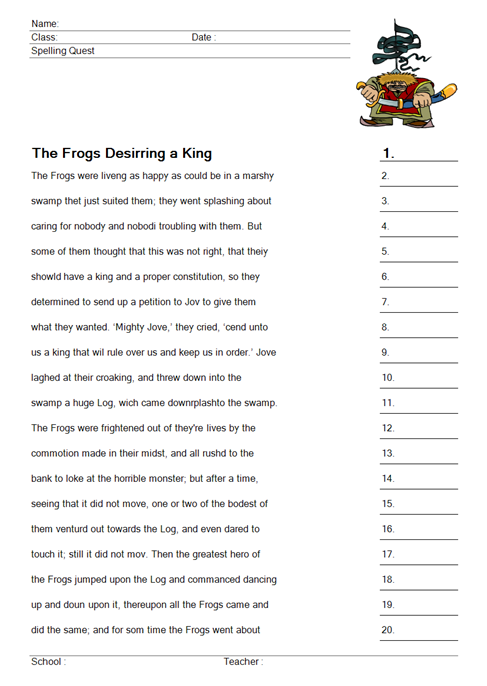 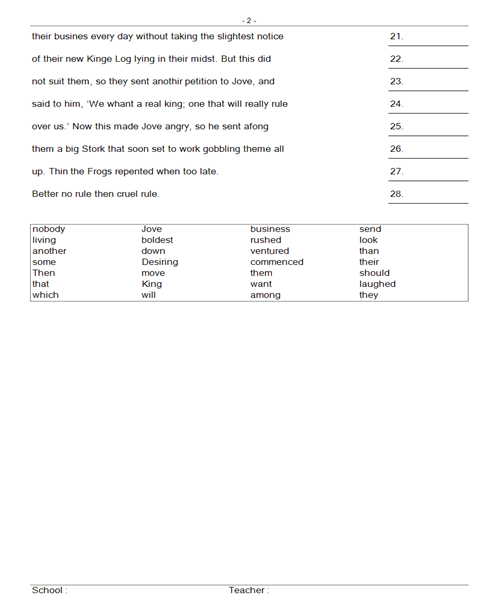 The Frogs Desiring a King


The Frogs were living as happy as could be in a marshy
swamp that just suited them; they went splashing about
caring for nobody and nobody troubling with them. But
some of them thought that this was not right, that they
should have a king and a proper constitution, so they
determined to send up a petition to Jove to give them
what they wanted. ‘Mighty Jove,’ they cried, ‘send unto
us a king that will rule over us and keep us in order.’ Jove
laughed at their croaking, and threw down into the
swamp a huge Log, which came downrplashto the swamp.
The Frogs were frightened out of their lives by the
commotion made in their midst, and all rushed to the
bank to look at the horrible monster; but after a time,
seeing that it did not move, one or two of the boldest of
them ventured out towards the Log, and even dared to
touch it; still it did not move. Then the greatest hero of
the Frogs jumped upon the Log and commenced dancing
up and down upon it, thereupon all the Frogs came and
did the same; and for some time the Frogs went about
their business every day without taking the slightest notice
of their new King Log lying in their midst. But this did
not suit them, so they sent another petition to Jove, and
said to him, ‘We want a real king; one that will really rule
over us.’ Now this made Jove angry, so he sent among
them a big Stork that soon set to work gobbling them all
up. Then the Frogs repented when too late.
Better no rule than cruel rule.